By Cara Winkley White tents set up on the hill. Drums heard across campus. Barbecue smells filling the air. The feeling of cold beer coursing through your veins as the anticipation of the game and excitement of a tailgate pumps … END_OF_DOCUMENT_TOKEN_TO_BE_REPLACED 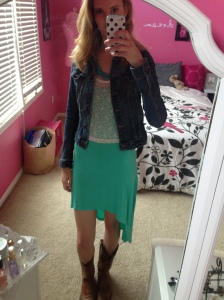 It’s a Sunday afternoon on The University of Kansas campus, and they are lounging on the couch, computer in lap, each one clicking away hard at work.

Style on the Hill features pictures of outfits, accessories and objects that Liedtke deems stylish on campus or around Lawrence.  The site has only been around for three weeks, but is quickly gaining recognition around campus.

Liedtke started the blog as a way to express her creative side on campus.

“There’s such a unique style here that no one has documented. It’s like uncharted territory,” Liedtke said.

Her idea for the blog came after interning at style.com where she worked closely with Tommy Ton, a photoblogger for the site. She accompanied him while he shot pictures of style on the streets, in department stores and in vintage shops in New York. She applies her new skills and knowledge from her internship to the blog.

“I learned that it’s important to express your own personal view and let it reflect what you think about fashion,” said Liedtke.

Having lived in a sorority, where Nike shorts and T-shirts are the weekday norm, Liedtke was always asked why she was so dressed up for class. She said girls would come up to her and ask if she had a presentation in class that day. In her hometown of San Francisco, dressing up is the norm and she hopes that this blog will inspire students to dress a little “cooler.”

Style on the Hill not only has a blog, but a Pinterest, Twitter, and Facebook page. In the height of blogs and social media, everyone is constantly online. According to The Pew Research Center’s Internet & American Life Project, 86 percent of internet users ages 18 to 29 use social networking sites such as Facebook. In addition to commenting on the blog, the Style on the Hill Facebook page allows students to “tag” their friends in featured photos.

“It’s almost like a pop culture hub of Lawrence and KU. There has never been something like this that people can go on and see people they know,” said Reynolds, graphic designer for Style on the Hill.

The blog captures KU students’ everyday fashion choices, but it also shows the lifestyle of Lawrence through pictures of buildings, art and various activities.

Liedtke is still taking in the whole experience. She doesn’t worry about the future, but she hopes that the blog continues to improve and becomes a bigger presence on campus.

“It has a potential to become really big,” said Liedtke. “I’m very lucky that no one else had done this.”

I love to read magazines, but these days they are just getting too expensive. Here are some of my favorite online magazine sites.

Check out this great blog I found on style in Kansas!

Upon returning from studying abroad in France this past spring, I realized how little of a fashion culture there is in Kansas. I am starting this blog to bring Kansas residents more information on new trends, fashion events, and related topics. There may be hints of French influences throughout the posts as well. I hope you all enjoy!

Buttons and Birdcages
lezoemusings.wordpress.com/
Style on the Hill

Bringing style to the sunflower state